Warning: setcookie() expects parameter 3 to be integer, array given in /home/route66ca/www/www/wp-content/plugins/uncode-privacy/includes/class-uncode-toolkit-privacy-public.php on line 99
 Evanston Inn - California Historic Route 66 Association – Helping you get your kicks in California! 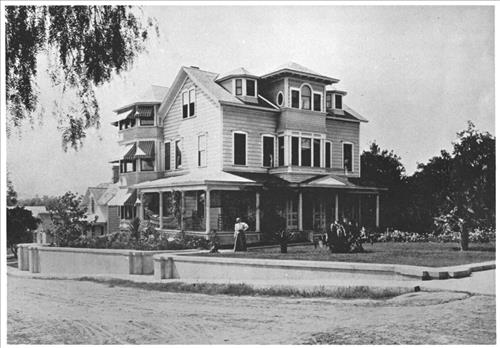 The Evanston Inn, Pasadena's only remaining wood-frame hotel from the 19th century, is an important reminder of the city's historic economic development. Smaller and homier than large luxury hotels like the Raymond (1901) and Hotel Green (1899), the Evanston Inn provided a quiet retreat for its many winter visitors. The Inn opened in 1897, several years before many of Pasadena's large hotels were available to a steadily increasing number of tourists at this time. Typical of the less elaborate, boarding house style inns, the Evanston was enlarged with wing appendages as demand increased. The Inn is a skillfully integrated combination of Queen Anne and Colonial Revival styling. The original building carries a variety of shingling textures and decorative features while the addition is more reserved, typical of architectural preferences of the next decade. The Evanston Inn is the last survivor of its type and period in the community, exemplifying the small resort hotel genre of Pasadena at the turn of the century.

During the late-19th and early 20th centuries, Pasadena achieved a nationwide reputation as a resort city. The importance of the tourist industry in Pasadena history is demonstrated by a passage of praise albeit lavish - in the Tournament of Roses annual review book for 1907:

Nature gave the opportunity for Pasadena; and man failed not to build thereon. It was perhaps first cast in her horoscope that Pasadena was to become a city when the men who laid her foundations decided there must be provided the very finest hotels. Seeing that this section was to become the resort of the whole country, they rightly divined that Pasadena, situated as she was, might attract the best from the stream of world visitors ....

Two large segments of the population were seasonal and temporary residents, particularly wealthy Easterners seeking a mild climate in which to pass the winter or recover health. Both groups resided in the hotels of Pasadena, which can be divided into two classes: luxury hotels such as the Raymond and Green and smaller establishments such as the Evanston Inn. The same 1907 Tournament of Roses book noted:

Besides the big hotels there are many of lessor size quite as notable in their way, as well as semi private boarding houses. La Casa Grande, in size next to those mentioned, El Vavra on South Euclid Avenue, with appointments hardly second to the largest hotels, the homey Evanston Inn on pleasant Marengo Avenue, the Guirnalda on East Colorado Street, and many others.

The Evanston Inn is one of the few remaining Victorian buildings in its immediate area. Yet its Queen Anne detailing and age are not intruded upon by its newer, neighboring apartment complexes. Set well back on its large lot and shaded by mature palm and citrus trees, the former hotel maintains the rural farmhouse quality that made it so attractive to its visitors in the early 1900s.

Historically, the Evanston Inn remains as the last survivor of this class of hotel in Pasadena, and also represents an exceptional blending of well-executed Queen Anne/Colonial Revival design with architecturally harmonious additions.

FREE! Sign up for our email list and we will send you 66 Must See Roadside Attractions on Route 66 in California!